The decision has been made to reschedule the 2020 and 2021 Civic Awards Ceremonies to be held at the Mayor’s Civic Service. Date to be confirmed.

The night was held at The Wiltshire where a hot food buffet was served.

The awards were presented by the Mayor for Outstanding Service to the Community. The citations were read by the Town Clerk. 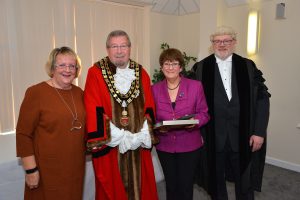 Owen, nominated for being Town Crier and Sword Bearer, first as deputy from 2001 and in office from 2005 to the present day. Owen has represented the town with pride and dignity both in this country and abroad. 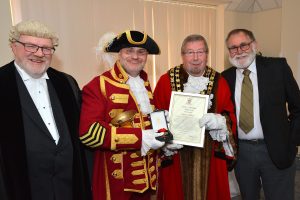 In all aspects of her life Ellen made her time count, not only with regards to her family and friends, but also the wider community and society. Ellen did so regardless of significant adversity facing her, overcoming it to fulfil her role of Chair of Governors for Noremarsh School, supporting the relief effort during the Calais refugee crisis, acting in support of Oxfam’s International Woman’s Day, fundraising for Cancer Research and through ‘Ellen’s Army’. 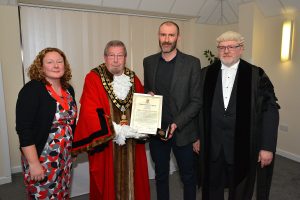 There can be no doubt that all their actions have not only strengthened the community but also stand as a shining inspiration in our town. Well done.