Please can we all have a little common sense and realise that if the clothing banks are full, it is not in the best interest to put bags next to the bin, apart from it looking unsightly it is also illegal fly tipping which can be prosecuted and a fine issued. Please be aware the area is covered by CCTV.

The Town Council has made Sainsbury’s aware of the problem and has contacted the Salvation Army to arrange a collection, but due to the lockdown they may take longer to collect than normal.

In the meantime, please keep hold of your clothing/recycling until the Household Recycling Centres are re-opened by Wiltshire Council under Governments advice.

This is much appreciated. 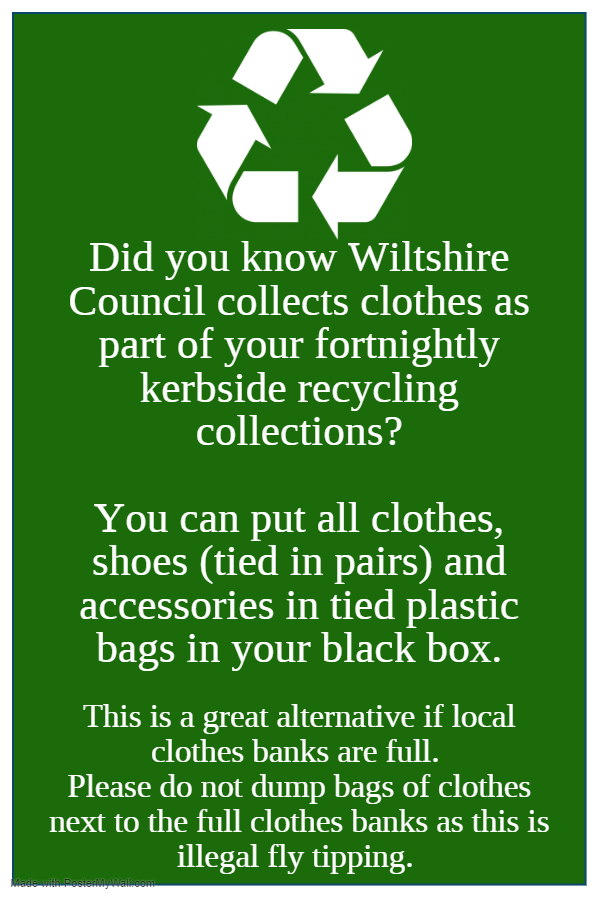 A Wiltshire resident has become the first recipient of a financial reward through the council’s ‘We’re Targeting Fly-tipping’ (WTF) campaign after witnessing an offence of fly-tipping in Purton.

The resident reported the incident via the My Wiltshire app and provided a witness statement to council environmental enforcement officers. The investigation led officers to the fly-tipper, who was issued with a £400 fixed penalty by the enforcement team as a result of his careless and criminal actions. The fixed penalty notice was paid in full by the offender.

The council is committed to cracking down on waste crimes such as fly-tipping, and will pursue all reports with evidence. Fixed penalty notices are a significant tool in combating this illegal activity, and the ‘We’re Targeting Fly-tipping’ campaign continues to raise the awareness that fly-tipping is a criminal offence and the council will work tirelessly to apprehend offenders. The reward scheme linked to this campaign will certainly assist in combatting this illegal activity.

Environmental enforcement officers are investigating several offences of fly-tipping that have occurred in Wiltshire since the lockdown. Formal interviews under caution will be arranged and conducted as soon as it is safe to do so in line with government guidance.

Residents can report fly-tipping at www.wiltshire.gov.uk/mywiltshire-online-reporting or by calling 0300 456 0100.

To find out more about the ‘We’re Targeting Fly-tipping’ campaign and rewards, including terms and conditions, please see www.wiltshire.gov.uk/community-environment-wtf